SPORTS: World Cup 2018-And the Hits Keep On Coming

So, Saturday June 30, saw the beginning of the Knockout Stage of the 2018 World Cup and boys and girls it has been a crazy start. Here’s what the bracket looked like at the start:

Now, if the picture didn’t load for you then allow me to give you a quick rundown of what it looks like.

Now, a few of these games have been played already so here’s the update: Uruguay outplayed Portugal to win, France dominated Argentina and won 4-3(Argentina scored late), Russia surprised everyone by upsetting Spain in PK shootout and the same ending happened for Croatia as the moved passed Denmark. This has been one of the most exciting World Cups I have ever had the pleasure to witness and it’s still not over. I am definitely looking forward to seeing everything else they have in store. 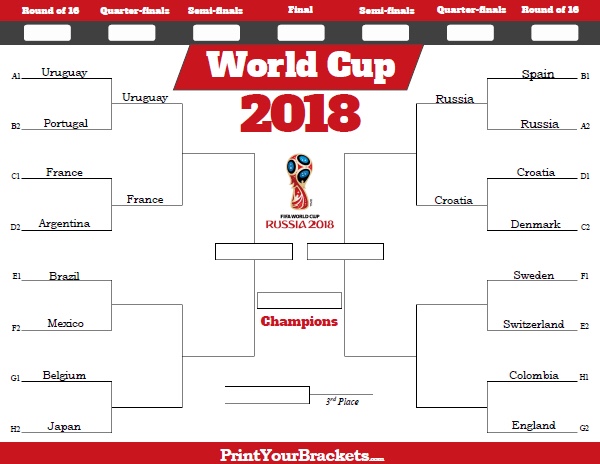 You can watch the games on Fox and FS1. Monday July 2 will have Brazil taking on Mexico followed by a talented Belgium facing off against Japan. Let’s go!!