GAMES: Hearthstone – The Weird Woes of The Witchwood.

One of the things I love most about Hearthstone is that it’s always changing. New cards, new mechanics, new strategies and sometimes even new modes keep me coming back. Whenever things start to feel stale and boring, the next expansion is just over the horizon. Ever since Blizzard instituted the Standard rotation, where only the Classic and most recent sets are legal, things have been changing more drastically and more frequently. New cards have a chance to see play because they don’t have to compete with the entire back catalogue, and the rotation can even make old cards suddenly feel new and useful again. The first new set of the year can be particularly influential, since it enters the game just as a large volume of cards is shuffled out. Sadly, this is not the case with The Witchwood.

It has been over a month since the release of Hearthstone’s latest expansion, but nothing has really changed. The same decks and strategies that were dominating the ranked ladder at the end of the last expansion, Kobolds & Catacombs, continue to do so, and with very few new cards. While this is common at the beginning of every expansion, as players experiment with new cards in old decks, the older archetypes are either retired or drastically different by this time. 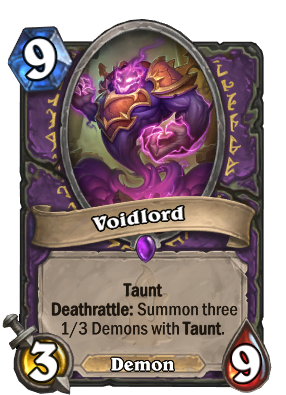 Currently, three versions of Aggro Paladin sit atop the meta, and while there are differences between them, they play essentially the same. Flood the board with lots of cheap minions in the early game and force your opponent to expend his resources protecting his own face instead of attacking yours. If you draw the right five cards, the game is over by turn six.  The other unscathed survivor of the Standard rotation was the Cubelock, a slow and controlling Warlock deck that cheats out massively powerful demons early in the game, and then creates multiple copies of them using the Carnivorous Cube. If the Cubelock manages to copy their Voidlord, a never-ending, self-replenishing wall of Taunts will keep you from ever damaging them again. Aside from a card or two, the Cubelock hasn’t changed and remains one of the most oppressive decks on the ladder. It is particularly frustrating to play against, as once the Voidlords start being summoned, there are very few ways to interfere in the Warlock’s game plan. If they draw the right cards, you end up essentially watching the Warlock play solitaire. I’ve seen many players simply rage quit when the first Voidlord appears. When you lose to a Cubelock, it often feels like there was nothing you could have done differently to change the outcome, which is the worst feeling a game can give a player. Unfortunately, this feeling is currently quite prevalent on the ladder.

“Fun and interactive” has long been the creed of Hearthstone’s design team. A lack of interactivity has ended the epic runs of some of the most powerful decks ever played. The original Miracle Rogue could easily draw through their entire deck and kill you in one turn, if you didn’t die of boredom first. The infamous Grim Patron Warrior could consistently generate over 60 damage in a single turn, regardless of the opponent’s actions. More recently, the Quest Rogue had to be nerfed twice—once after its first appearance, and again now that new cards have made it unfair again. All of these decks had the same problem: they were oppressively powerful, and near impossible to counter once they got rolling. There were no near victories against these decks—either you blew them out before they could start their combo, or you got totally stomped. While combo decks seem to be the regular offenders, they are not inherently unfair, just difficult to balance. The Exodia Mage is a long-standing staple of Hearthstone, a slow and controlling deck that uses Archmage Antonidas and a bunch of Sorcerer’s Apprentices to kill you with a chain of unlimited free fireballs. That may sound terribly one-sided on paper, but this combo is incredibly complicated and difficult to pull off, requiring many pieces to work together. There are plenty of points where a skilled player can throw a monkey wrench into that design, forcing the Mage to improvise a less than perfect solution. 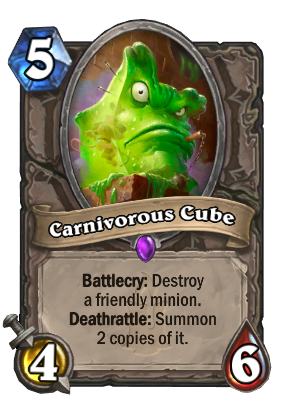 The Cubelock, however, has no such weaknesses. It is Hearthstone’s Swiss Army Knife, with a tool for every situation. There is no board it cannot clear, no minion it cannot destroy. It doesn’t even care if you slay its minions—the deathrattles are so powerful that the Warlock will kill its own! It can summon 9-mana demons on turn 6, or bum rush you with a bunch of cloned Doomguards. In the most frustrating match I can remember, a Cubelock wiped my board six different times, healed for 40, played two giants and four Voidlords. I doubt I scratched his face after turn five. It’s not even difficult for them to pull off these maneuvers, since none of them require more than three pieces and the Warlock can always draw more cards. While the Cubelock performs well against most decks you will see on the ladder, the only ones that beat it regularly are built specifically to counter it. When that happens, a deck is simply too powerful. A deck like this also makes the competitive scene dull, since every player brings The One Deck and three Counters to The One Deck. Watching the same three matchups over and over does not make for a compelling tournament.

Blizzard has recognized that there is a problem, but not what it is. They announced that they will be adjusting the mana costs of a few cards and reducing the healing provided by one card, but nothing that would make the Cubelock less irritating to play against. It may not get to start its shenanigans until one turn later, but it will still be rather easy to build that never-ending wall of Voidlords, and the epidemic of rage-quits will continue. Sadly, it seems The Witchwood has been Hearthstone’s most disappointing expansion yet—almost nothing changed, and the average game did not get more fun. I used to play every day, but after a month of The Witchwood, my Battle.net icon sits idle and unclicked. Here’s hoping the next expansion is a return to form.