LIFESTYLE: Things To Avoid At Your Next Convention – A Reminder

As the resident convention goer and cosplayer, i specialize in delivering all of the details as far as what to expect when  you’re getting ready for a convention, however there are plenty of things on the proverbial checklist that you do not want to forget. A lot of these should come as second nature, however there is always situations that will arise…. in our lives… but we gotta be smart about it  *Usher Voice*.

I’ve concocted a couple of “DO NOTS” for convention time to ensure a smooth, stress free transaction. Trust me, this list has been made with much first hand experience in mind, some from being on the receiving and giving end of each “what the hell” moment. Each time you’re reminded of them it appears still stenciled in your memory like the Atlanta Falcons blowing a 28 point lead.

1: DON’T attempt to book rooms last minute. You will be disappointed.

The Priceline negotiator can’t help you today. However…

Captain Procrastinator here to inform you that booking a room right before the convention is a shitty idea. Your hotel rates will be sky high, you’ll likely have to try and conjure up several bunkmates in which you will share a bed/floor to make it even moderately affordable. Even then most of your options will be limited to hotels further out the way that are nowhere near your convention. Oh, you forgot your bag with mini donuts and a flask in it? Have fun taking an Uber all the way back to your hotel 12 miles away and back. Your other friends will be at panels, meeting hot cosplayers and drinking Hennessy like its Dr. Pepper from a camel pack.

Another perk of booking in advance is that you can gauge which friends are for sure going to accompany you and weed out the “maybe’s”. This helps figure out room arrangements, who sleeps where, coordinating cosplays and if anyone needs “special” time to do their own thing in the room it can be sorted out among the roommates. Booking late usually means you’re paying thousands of dollars for a room, or crashing with 5-9 people. That might be fine for the younger folks, but the comfort level isn’t ideal for the seasoned vets that could have other options and aren’t hindered by price.

You have separate plans later and you want to meet up later? Cool, tell your group.

You wanna go flirt with the sailor scouts posted up near the LARP panel? Cool, tell your group.

You feel like going back to the hotel to take a power nap because your diet has been Hennessy and hot wings for three days? Again, tell your GROUP.

Ain’t nobody trying to go around looking for you later on, or conducting a search party, especially at large, multi level cons.

We all have that “Does she have a friend” type friend of the group  that has an uncomfortable fetish for cosplay girls something serious. Mind you, we can all appreciate a certified ten, but we don’t need to hear you making suggestive sounds every time you see a glimmer of COSBOOTY or get all weird around famous panelists and celebrities from your fandom.

No one wants to have to explain to other people why you’re being a weirdo. If anything, if someone catches your eye that seems to be your type, make some conversation outside of the cat-calls they have heard all day. (Thats a general pro-tip for you know, any game spitting perspective anyhow)

Additionally, do not touch cosplayers/actors/models or generally anyone without consent to do so. Thats some creepy shit and will get you hit with the ban-hammer. The only hammer Thor himself ain’t even messing with.

Bathe. Brush your teeth. Avoid being the musty friend. No one will want to hug you and you’ll be known as the homie that smells like everything that’ll repel human interaction. And don’t try to cover it up with cologne either, you ain’t slick. Just washeth thine arse.

I can’t tell you how many times I have avoid hugging someone i know conventions  because they have some kind of B.O going on. Then I have to seem like the asshole that doesn’t give hugs. Sometimes i want to hug people. Don’t deny people the ability to hug you because you and Speed-Stick are currently beefing.

5: Lastly, DON’T sweat the small stuff. You can do that any other time.

Expect the unexpected to happen. Didn’t get to see that panel that you’ve been dying to see, meet that famous voice actor/cosplayer or just general stuff going downhill that seems to be never-ending?

Don’t spend your “con” experience worrying about whats going on outside of it, or missed opportunities while you are there. Enjoy yourself and your time with your friends as you will only get that particular moment in time to make memories. There is always next year to build upon missed opportunities. Plan, prepare and execute.

Enjoy your friends, make new ones, and build those memories  THE PLAYER WAY! 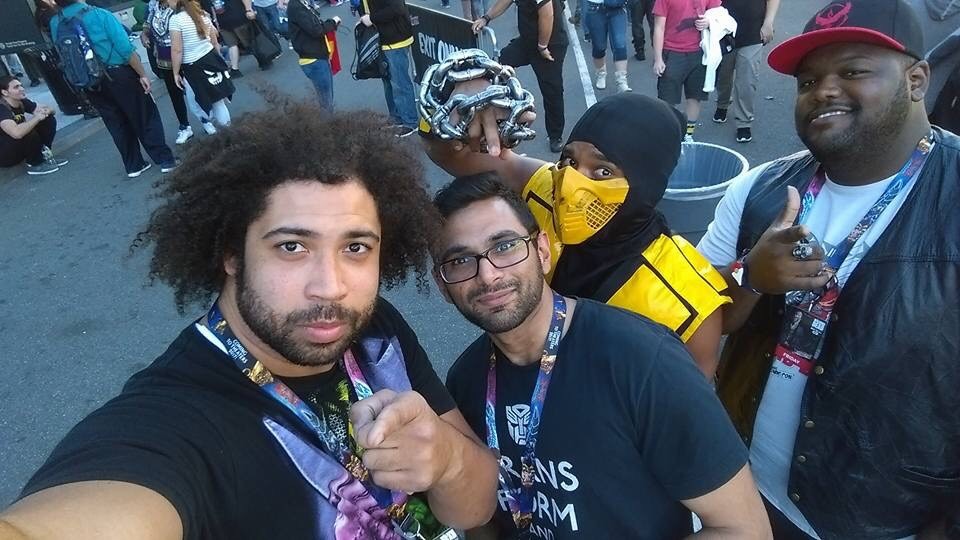 Catch your resident PYWN cosplayer at Momocon this year as our designated press!