TECH: The Home Phone of Tomorrow – Amazon Echo Show Gives Us a Glimpse Into the Future

Remember in Demolition Man where Stallone gets a steamy video call in the middle of the night? Well that film takes place in the year 2032, a far off futuristic world that we have yet to reach…or have we? If Amazon has anything to say…welcome to the future.

Even typing anything close to “the future is now” adage feels ironically antiquated at a time where thirty years ago we thought we’d have flying cars. But as another old saying predicted, the truth is stranger than fiction. We now have drones that can deliver groceries on-demand, self-driving cars, glasses that record and define the world around us, pocket devices that function as cash at a fingerprint, and now the home phone makes a come back.

It’s becoming clear that Amazon’s style with engaging the masses is low-key, as they unceremoniously launched a temporarily a price drop on the Echo Dot prior to Father’s Day.  Evidence of Amazon’s “limp-in” style could be seen at CES 2017 (Consumer Electronics Show, the premiere expo for new tech) as despite the online-retail mega-power not hosting an official press conference or booth on the floor, compatibility with the Alexa OS was one of the key selling points of many wearables and other burgeoning gadgets – showing that Amazon’s trendy IP/tech are on the pulse.  So in June, it was no coincidence that along side the Echo Dot flash sale 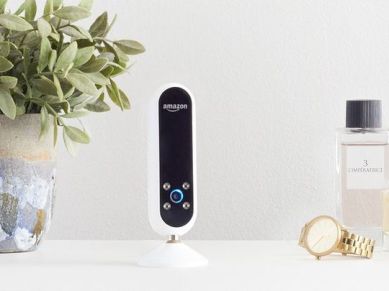 (dropping the price to $39), Amazon launched a new product header/navigation baron their site titled “Echo & Alexa: Designed Around Your Voice.” While a similar navi- accompanied the usual Amazon home gadget product line on their site…what did we notice seemingly random added? A new line of products called “Look” and “Show.”

While we won’t talk too much about the Echo Look (a hands-free camera & style assistant targeted toward the fashion self-conscious and selfie addicted) the over arching point is that Amazon is looking to peel away from their competition (Google & Apple) in the growing Smart Home/Personal Assistant tech market by reuniting audio and video services normally reserved for tablets, smartphones and personal computers. Take a look at the demo for the Amazon Echo Show, that promises to be the premiere Christmas gift for every early adopter and smart home enthusiast.